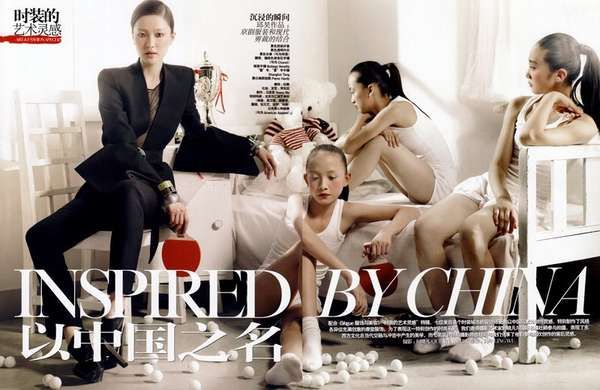 Olcay — July 29, 2009 — Fashion
References: vogue.cn & designscene.net
Share on Facebook Share on Twitter Share on LinkedIn Share on Pinterest
Shot by Quentin Shih, Vogue China’s August 2009 issue portrays the new lifestyle in China that is affected by the modern western culture. Although the series of shoots are called “Inspired By China,” the editorial observes the new Chinese generation that is consuming Coca Cola and food made by McDonald’s.

Their evidence of wearing Nike shoes, playing Lego and PlayStation while eating popcorn proves to us that the Chinese culture has been pretty much inspired by the Western world.

In these series of shoots, supermodel Du Juan is posing in pretty dresses, together with young Chinese athletes. The contrast between the simple, pure white look of the athletes and the chic, colorful outfits of Du Juan, also expresses the rising change in Chinese culture.
4.5
Score
Popularity
Activity
Freshness
Get the 2021 Trend Report FREE