Bringing Refugee Camps Into Focus
Next
Set of
Related
Ideas 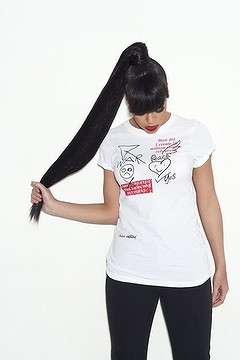 The Vivienne Westwood ‘No Place Like Home' Project Does Goo

Erin Kirkpatrick — May 4, 2012 — Social Good
References: eco-age & eco-age
Share on Facebook Share on Twitter Share on LinkedIn Share on Pinterest
Today, the Environmental Justice Foundation’s (EJF) launches its collaborative fashion effort with Vivienne Westwood for the ‘No Place Like Home’ campaign. The simplistic, child-like design explains succinctly the detrimental and harmful realities of war and its effect. This campaign focuses on raising awareness on the issue of climate refugees -- people who have been forced to leave their homes because of natural disasters.

Climate refugees are virtually unprotected as they are not entitled to legal protection normally awarded to war refugees; further, they remain unrecognized by the UN. The lack of legal protection and personal security leaves these individuals vulnerable and susceptible to more hardships. Currently, war displaces and creates approximately 38 million refugees.

This is what the ‘No Place Like Home’ Campaign hopes to one day eradicate. The shirt’s design features a sad, black-eyed face on one side labelled war which proclaims, “I have created 10-million refugees;” in contrast, the heart-shaped smiley face exclaims that peace is the way to go.

Designer Vivienne Westwood has used her star status to promote this important issue, suggesting that more needs to be done with regards to climate change and the people it will inevitably effect. The campaign already boasts notable celebrity attention with Gillian Anderson of X-files, Atonement star Romola Garai and The Vaccines, all sporting the climate refugee shirt.
3.7
Score
Popularity
Activity
Freshness
Get Better and Faster