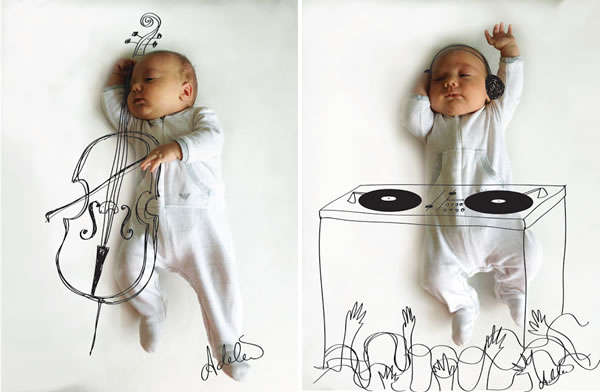 Meghan Young — November 13, 2012 — Fashion
References: milasdaydreams.blogspot & neatorama
Share on Facebook Share on Twitter Share on LinkedIn Share on Pinterest
The Vincent Doesn't Want to Sleep portrait series introduces photographer Adele Enersen's newest addition to her growing family. An adorable sibling for sister Mila, who was creatively captured two years ago by her mother as well, he has been doodled over instead of being surrounded by clothing and other physical props

Shooting with her iPhone and mocking up quick sketches with a stylus, Enersen imagines what her son is thinking about in the Vincent Doesn't Want to Sleep series. It appears she has some musical dreams for her son, portraying him first as a cellist and then something a little more modern: a DJ. By his gestures, Vincent may have a successful career ahead of him in the industry.
4.8
Score
Popularity
Activity
Freshness
Access Advisory Services