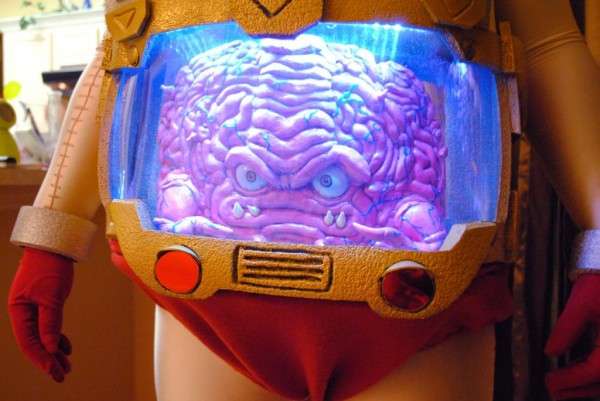 Andrew Sztein — January 20, 2013 — Art & Design
References: therpf & fashionablygeek
This unforgettable Ninja Turtles villain costume should appeal to anyone who grew up in the late 80s/early 90s spending their Saturday mornings watching the cowabungariffic adventures of the Ninja Turtles.

The brains of the villainous operation, Krang, is the focus of this incredibly detailed replica. In the TV series, Krang was a self-aware and conscious brain that got around in a robot suit since he lacked the proper appendages to move himself. The challenge of the costume would then be putting the Krang character where the wearer’s guts should be.

The costume was accomplished by combining foam and spandex for the suit, and Crayola modeling clay for the Krang portion. It must have taken a lot of effort to create, but not as much effort as the Ninja Turtles will need to defeat him.