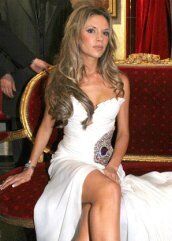 While on tour in Germany, the Spice Girl reported that tens of thousands of dollars of designer clothing had been stolen from her dressing room.

"Furious Posh had a bigger pout than ever when she got off stage after the Spice Girls' gig in Cologne on Thursday to find her room ransacked," the Sunday Mirror reported. "Bizarrely, none of the other girls were targeted.

"Two pairs of shoes, at £5,000 a pop, were pinched along with stage outfits, including jackets and jewellery.

"But Victoria, 33, was most upset when she found they'd taken a red satin dressing robe that Roberto Cavalli had designed especially for her to wear backstage. It had 'Mrs Beckham' on the front and 'Posh' on the back."

Ouch, that sucks, but it would be interesting to know if it was a Becks hater trying to sabotage her, or a fan desperate for her glamorously Posh wardrobe!
3.7
Score
Popularity
Activity
Freshness
Get the 2021 Trend Report FREE