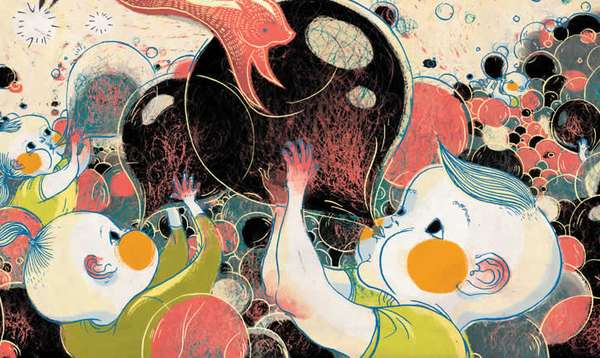 Jason Soy — January 16, 2012 — Life-Stages
References: geyserofawesome
There is nothing more adorable in the world than a chubby-faced child, and luckily enough for fans of cutesy things, Victo Ngai often uses pudgy-cheeked kids as the subjects of her extraordinarily whimsical illustrations.

Pairing together wildly imaginative concepts with mesmerizing colors, each one of these outside-the-box renderings will have you in retrograding back into your youth and unlocking the joy and energy you had before you hit your teenage years.

Aside from her charming illustrations’ ability to make viewers feel like children again, Victo Ngai’s work is also distinct in that she infuses her creations with her Chinese heritage. Many of the subjects featured in Ngai’s images borrow the aesthetics of traditional Chinese depictions of children, from the Mohawk-like ponytail hairdos to the aforementioned bulging cheeks of each kid subject.
3.1
Score
Popularity
Activity
Freshness