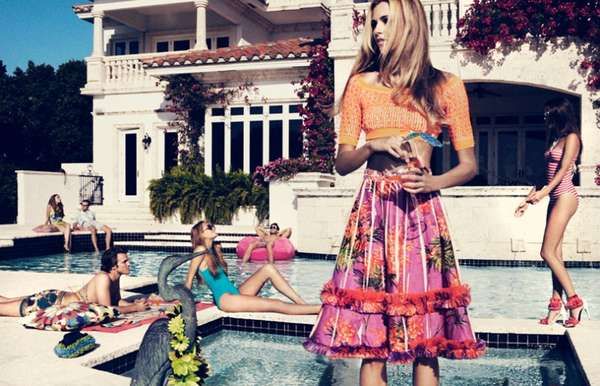 Meghan Young — May 25, 2012 — Fashion
References: fashiongonerogue
Share on Facebook Share on Twitter Share on LinkedIn Share on Pinterest
The Velvet June 2012 editorial will get people revved up for the summer season, if they aren't already. Soon enough people's schedules will be chock-full of beach dates, barbecues and, of course, a few good ol' pool parties. If they aren't, the Velvet June 2012 editorial will inspire some to host their own.

Lensed by Swedish photographer Marcus Ohlsson, the Velvet June 2012 editorial is all about fun in the sun--in a luxurious way. It stars model Valentina Zelyaeva as the hostess with the mostess. Captured amongst her equally chic guests, the Russian beauty was outfitted by stylist Laura Bianchi. Clad in striking tropical prints and bold colors, her looks were perfected by hairstylist Mike Lundgren and makeup artist Katarina Håkansson.
6.6
Score
Popularity
Activity
Freshness
Get the 2023 Trend Report FREE