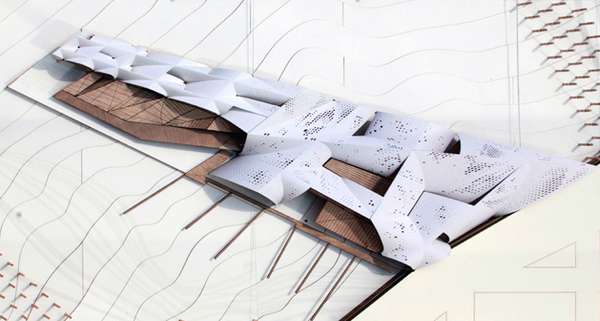 Vaultscape by Jeremy Jih Applies an Undulating Landscape to a Pier

Amelia Roblin — February 14, 2012 — Art & Design
References: linkedin & suckerpunchdaily
One of the proposals for the new wharf at the San Francisco 2012 America's Cup sailing regatta, Vaultscape by Jeremy Jih brings an extra dimension to the familiar form of a pier. The basic idea may begin with a long, flat stretch of cement, but it has here been drastically remodeled. It offers multiple levels and initiates a formal dialogue with the rough bay waves and the splendid passing yachts.

Similar to some of the other projects that have surfaced, this one also paves an uneven skin along the entirety of the jetty. This particular submission explores the drama of an expansive vaulted network, creating vast and smaller scale spaces for a variety of possible programs. The reuse of the arching concrete formwork for the floors establishes an unsteady atmosphere inside Vaultscape by Jeremy Jih. Small perforations in the cladding introduce tight beams of sunlight into what otherwise might feel like the bowels of a big ship.
4
Score
Popularity
Activity
Freshness