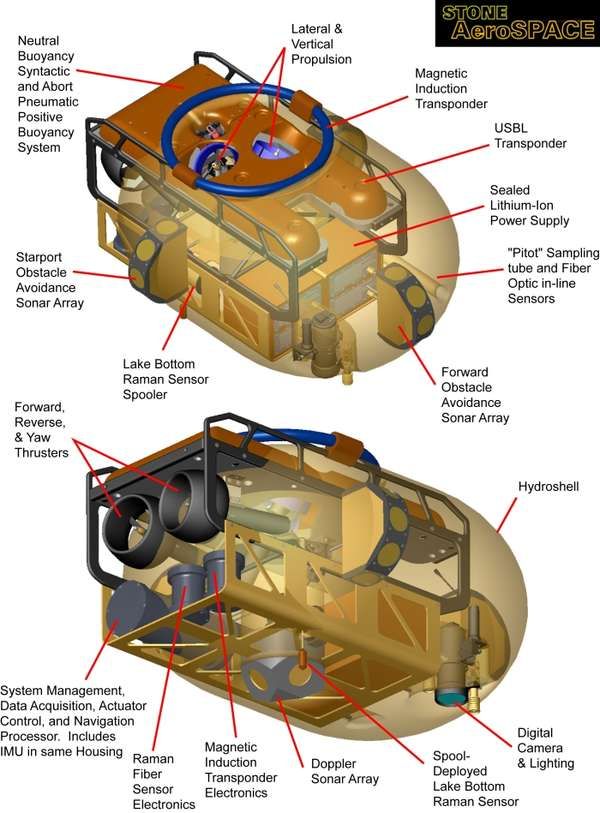 IdeaMan — March 2, 2008 — Tech
References: stoneaerospace & tigger.uic.edu
Share on Facebook Share on Twitter Share on LinkedIn Share on Pinterest
A new robot named Endurance - an acronym for Environmentally Non-Disturbing Under-ice Robotic ANtarctic Explorer - spent last week probing the depths of Lake Mendota, near Madison, Wisconsin. The University of Illinois at Chicago team that developed the robot traveled to the icy lake to test the robot's ability to withstand cold temperatures. According to the university's press release, the robotic probe, funded by NASA, is "an underwater vehicle designed to swim untethered under ice, creating three-dimensional maps of underwater environments. The probe also will collect data on conditions in those environments [and] use sensors to characterize the biological environment".

As if Wisconsin isn't cold enough, the team's next destination is Antarctica's permanently frozen Lake Bonney for further cold weather testing in late 2008 and again in 2009. The data from the Antarctic tests will be relayed back to the university's Electronic Visualization Laboratory, where the data will be analyzed remotely.
1.6
Score
Popularity
Activity
Freshness
Get Better and Faster