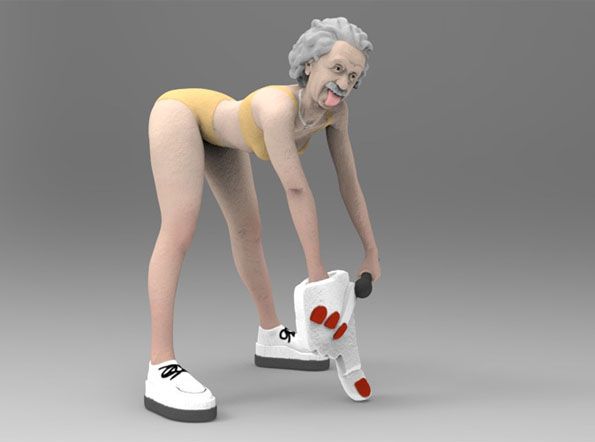 Angela Rajic — December 12, 2013 — Pop Culture
References: thisiswhyimbroke & incrediblethings
Share on Facebook Share on Twitter Share on LinkedIn Share on Pinterest
Movie over Miley, Einstein is taking over twerking with this new Miley Einstein twerking doll. The doll features Einstein head put onto Miley Cyrus's body clad in a bra, panties, running shoes, microphone and a foam finger. The body is in full twerking mode, mimicking the singer's infamous MTV performance. Einstein's face is modeled after the famous photograph of him sticking his tongue out at the cameraman.

Twerking has taken pop culture by storm since Cyrus's infamous MTV award show appearance where she performed a bump-and-grind performance with Robin Thicke, and twerked with dancers clad in teddy bears. This twerking doll is a bizarre mashup of science and pop culture, but is also a commemoration of modern pop culture and the ups and downs of fads. Whether you find it funny, or a reminder of the issues of media culture, this doll will be hard to forget.