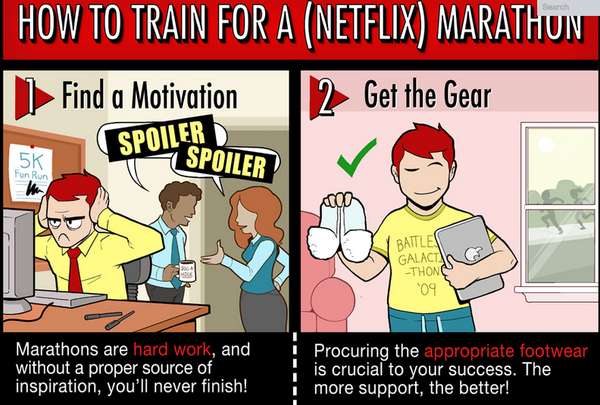 Amanda Greer — June 3, 2013 — Pop Culture
References: collegehumor
With Netflix offering every single episode of hits like Parks & Recreation, Mad Men, It's Always Sunny in Philadelphia and Community, it's pretty impossible not to try your hand at a TV marathon.

This comic strip from CollegeHumor describes the arduous task of suffering through endless hours of awesome television. The comic warns potential TV marathoners to load up on junk food, tweet often and brag to co-workers when finished. This is a painfully accurate description of how these TV marathons go down. They begin with excitement and end with bloating and reddened eyes.

The 'How to Have a Netflix Marathon' comic is a hilarious take on a cultural phenomenon that is happening more and more often. Without having to wait a full week to see the next episode of a favorite show, it's becoming more and more tempting to keep watching until you pass out.
1.6
Score
Popularity
Activity
Freshness