Home of the Trolls 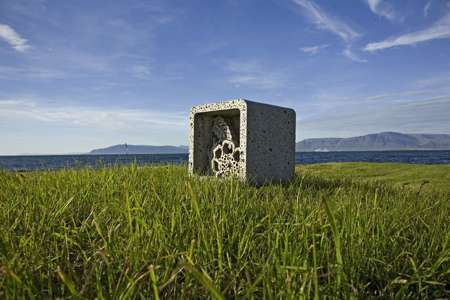 Bianca — October 12, 2007 — Unique
References: bility.is
These Lava Flowers were sculpted out of solid Icelandic Lava and are iconic of the country's folktales. The 40x40x40 cm cube was jet-cut with water by Gudrun Lilja GunnlaugsdÃ³ttir for design group, Studiobility.

Icelandic mythology includes countless tales of trolls and Huldufolk (hidden people of the hills) that live within rocks. Stones such as the Lava Flower represent the homes of these creatures, and therefore hold special cultural meaning.

"The lava stone was taken where a new road is being laid and turned into nature/story again," GunnlaugsdÃ³ttir' said. "In Iceland we believe the 'hidden' people live in the stones."

Unlike in other cultures, these beings are not perceived as ugly and scary. Whereas we think of trolls living in ugly, dark, swampy caves, the Huldufolk, for example, are believed to live inside extravagant and beautiful rock formations. In Iceland it's believes that trolls are wanderers of the night, and that if they do not make it back to their dark caves before the sun rises, they turn to stone under its light.

The Lava Flower will be on display in Paris at the the ToolsGalerie in January.

If you are as intrigued as I by these hidden people, check out Octavia.net.

"Of all the spirit world, huldufolk are the most like humans, except they are inevitably more beautiful, talented, and charming," Octavia says. "They interact with humans when and where they wish to. They are generally benign, but terrible things have occurred to those who have wantonly disturbed or destroyed their dwellings, from huge cost overruns on construction sites to accidents and even death."

If that's the case, whoever ends up with the Lava Flower had better take excellent care of it!
2.1
Score
Popularity
Activity
Freshness