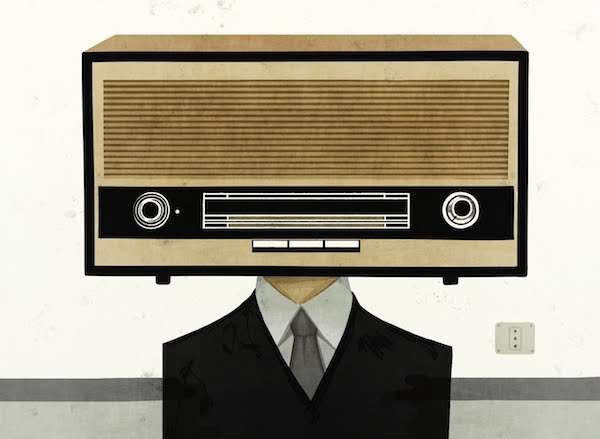 These Toni Demuro Illustrations are Expressive

Josh Triantafilou — March 20, 2012 — Art & Design
References: tonidemuro.blogspot & visualnews
Share on Facebook Share on Twitter Share on LinkedIn Share on Pinterest
As an artist, Toni Demuro picks up on things that slip by other people. Her series, simply entitled ‘Face Radio #1 to #15,’ demonstrates this point well. Demuro makes use of the fact that old radios look vaguely like human faces, which is heightened when these radios are placed on human bodies.

Toni Demuro applies a muted sense of depth and simple color schemes in her illustrations for a clean, well-defined effect. The pictures succinctly and clearly portray their subjects. Indeed, these illustrations are portrait; they point to a tendency people have to personify inanimate objects so that they may better relate to such objects.

Toni Demuro’s other pieces show a similar brand of empathy as well; whether it be a curious snow man, a pensive hipster or impassioned drummer, her subjects showcase human emotions that are endearing, not overbearing.
2.3
Score
Popularity
Activity
Freshness
View Innovation Webinars

Hectic-Hued Artwork
These Viktor Hachmang Designs are Funky and Intricate