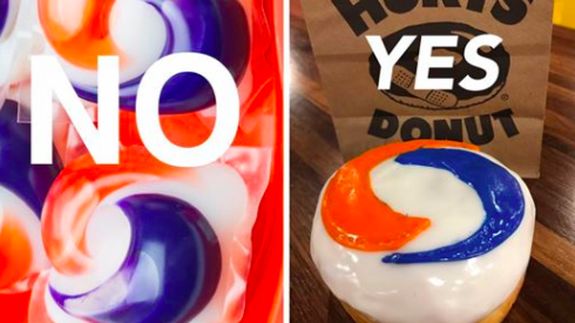 Alyson Wyers — January 28, 2018 — Lifestyle
References: mashable
While no one is really sure why young people have been purposely consuming laundry detergent pods, it is much easier to get behind these Tide Pod donuts. Located in Springfield, Missouri, donut shop Hurts Donut invented a limited edition offering designed to look like the colorful detergent capsules. The Tide Pod donuts were only available for one day. This sort of flash promotion works well in conjunction with the Internet fad, which will hopefully be abandoned soon for the sake of the teenage participants' health (many have been hospitalized after ingesting the poisonous laundry chemicals).

The white, orange and blue swirl-decorated donuts are a dead ringer for the original Tide Pods, and will likely do much less damage to your insides.
2.4
Score
Popularity
Activity
Freshness