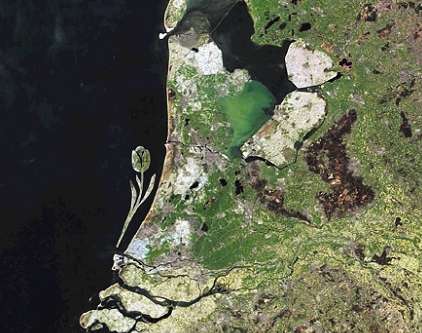 Happy Hotelier — November 9, 2007 — Eco
References: happyhotelier
Share on Facebook Share on Twitter Share on LinkedIn Share on Pinterest
On initiative of the Christian Democratic Party CDA, Dutch Parliament instructed Dutch Ministers (who reside in "The Hague") to study the benefits of constructing an artificial island in the North Sea between Rotterdam and IJmuiden. IJmuiden is the access to Amsterdam Harbour. Its secondary function would be to protect the weak Dutch coastline that seems under threat by global warming.

Not a bad idea considering many Dutch contractors are getting a lot of experience through involvement with the Emirates Islands building, not to mention giving New Orleans advice on flood protection.

In the proposal, the island is described as having a tulip shape, a national symbol of The Netherlands. Most marketeers tend to forget that Dutch "traders" "stole" the tulip bulbs from the Turks and initiated the Tulip Mania.

In this context, it is funny how Bert Brussen, a freelance journalist, placed an alternative Turkish Island shape as a prank as a counter proposal for the island by the leftist PVDA (Dutch Workers or Labour) party on his Blog :

Some "Turkish Delight" as consolation in case Turkey won't become a EG member?

However I do like the Tulip idea!
3.9
Score
Popularity
Activity
Freshness
Get Better and Faster