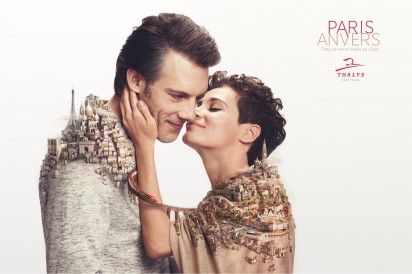 Meghan Young — November 29, 2013 — Marketing
References: rosapark.fr & ibelieveinadv
The Thalys Fast Train ad campaign focuses on one of the most important things in the world: relationships. Even with the advancement of communication technologies such as Skype and more, nothing can replace physical contact. These print ads promote that along with its quick train service. As its tag line states, "They’ve never been so close.”

Conceived and executed by Rosapark, an ad agency based in Paris, France, the Thalys Fast Train ad campaign illustrates this through city-garbed couples. Each person represents the place they are from. Art directed by Mark Forgan and Cécile Chabert with creative direction by Jamie Standen, the campaign was shot by photographer Paul Morel and illustrated by artist Christophe Huet of 3D Studio Asile Paris. Paul-Henri Masson worked on the typography.
2.6
Score
Popularity
Activity
Freshness