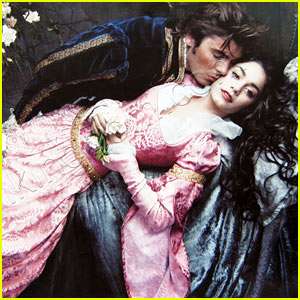 lourdes sanchez bayas — March 9, 2009 — Pop Culture
References: disney.go & justjared.buzznet
Share on Facebook Share on Twitter Share on LinkedIn Share on Pinterest
As they did over a year ago, Disney has teamed up with celebrities for a series of portraits in which the famous faces are dressed up as Disney’s iconic fairytale characters including Alice in Wonderland, Cinderella and The Little Mermaid.

This time around, however, it seems like the company is going for younger models, as illustrated by the casting of High School Musical couple Zac Efron and Vanessa Hudgens to play the roles of Princess Aurora and Prince Phillip in one of the world’s most famous fictional tales: "Sleeping Beauty."

The much-awaited photo featuring the two teenagers is displayed on the first two images above. The rest of the pictures come from a similar project staged by Disney and a number of Hollywood celebrities over a year ago.

The photo, which was snapped by famed photographer Annie Leibovitz, is slated to be published in Disney Twenty-Three magazine.

Check out some of the celebrities who collaborated in last year’s project in the gallery above:

- Beyonce as Alice in Wonderland

– Jennifer Lopez as Princess Jasmine and Marc Anthony as Aladdin

– Whoopi Goldberg as Aladdin’s The Genie