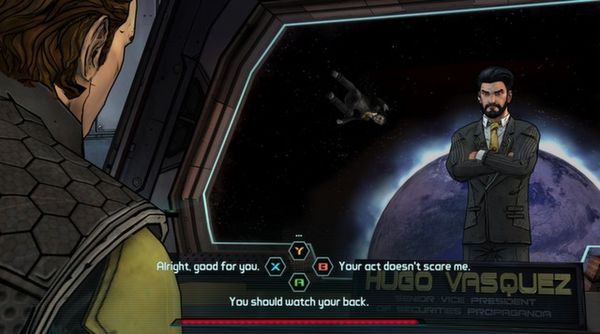 Tales from the Borderlands is All About Making Choices, but Not Moral Ones

Laura McQuarrie — June 12, 2014 — Tech
References: telltalegames & cvgames
Tales from the Borderlands is an exciting new game from Telltale Games that was just announced at E3 2014. The studio is known for other amazing apps like The Walking Dead and The Wolf Among Us, which are all about tailoring gameplay based on the choices made in-game.

The newest game from Telltale Games will revolve around two characters, Rhys and Fiona and as the game's title suggests, it will involve elements of a first person shooter, although this will be mixed with the kinds of engaging characters and storylines that Telltale Games is so well-known for. While previous games have stressed picking the morally "right" thing to do, this game puts less of an emphasis on doing good, since you'll be able to do things like bribe other characters.

Tales from the Borderlands is set for a release this summer and it will unfold over the course of five episodes, with new episodes released on a monthly basis.
3.4
Score
Popularity
Activity
Freshness