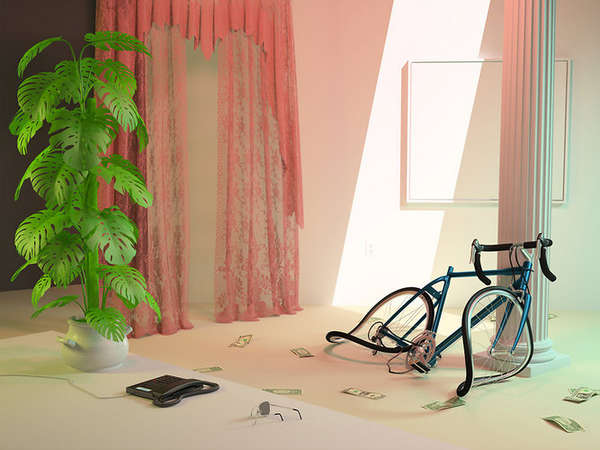 Meghan Young — January 11, 2013 — Art & Design
References: salon94 & fastcodesign
Synthesizers by Takeshi Murata, an artist born in Chicago and based in New York, is a unique take on the phenomenon of computer-generate imagery, more commonly known as CGI. As though a mockery of carefully and lovingly crafted Pixar films, the exhibit showcases what appear to be graphic tutorials gone wrong. Crude and confusing, viewers will be scratching their head as they try to make sense of the scenes. Why is the bike bent? And is that a ship in a gatorade bottle?

Since CGI often relies on fabricating real-life scenarios, Synthesizers by Takeshi Murata spits in the face of that endeavor. The logic behind such a stance becomes more apparent when viewers learn that Murata is self-taught using You Tube videos. He deliberately embraces his limited know-how.
0.8
Score
Popularity
Activity
Freshness