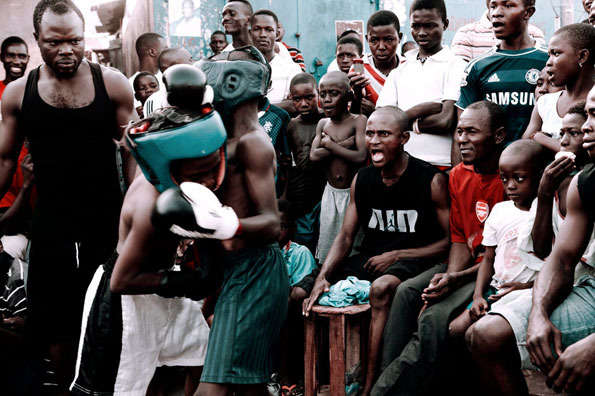 Street Fight by Luca Sage is Both Powerful and Violent

Meghan Young — November 14, 2012 — Fashion
References: lucasage & itsnicethat
Share on Facebook Share on Twitter Share on LinkedIn Share on Pinterest
Street Fight by Luca Sage, a photography based in London, England, is a photo series documenting the street fights in Africa. At once powerful and violent, the imagery set forth is not something someone sees on a daily basis, at least not in the Western world. Sage has traveled across Africa capturing "local communities’ near religious commitment to sport," as observed by It's Nice That.

In this case, Street Fight by Luca Sage revolves around the love of boxing. Africa is so passionate about this sport that a proper facility nor a ring is needed to host the them. At least the fighters are outfitted with gloves and headgear to protect themselves, making the activity appear more safe and civilized. Sage also shot football training in the Ivory Coast and more boxing in Ghana.
2.8
Score
Popularity
Activity
Freshness
Attend Future Festival