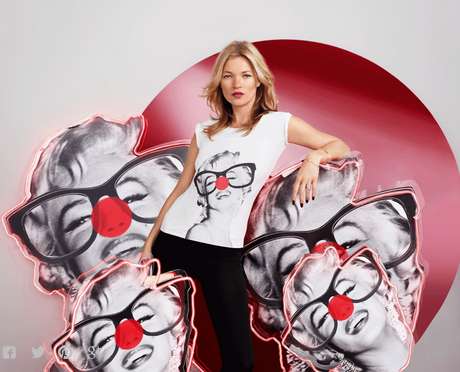 Erin Fox — February 5, 2013 — Social Good
References: elleuk & comicrelief
Share on Facebook Share on Twitter Share on LinkedIn Share on Pinterest
2012's most searched fashion designer has collaborated with a charity which dedicates its time creating a poverty free world; the Stella McCartney for Comic Relief charity tees are a fun way to drive change to a culture. The t-shirts are designed for Red Nose Day 2013, a United Kingdom based event, where BBC showcases hilarious comedy sketches to raise money. This event happens every two years and has been commemorated onto graphic tees featuring The Beatles, Tommy Cooper and Marilyn Monroe.

The charity was created by Richard Curtis and Lenny Henry in 1985 for the sole purpose of creating a lasting change of the less fortunate in the United Kingdom and Africa. The Stella McCartney for Comic Relief t-shirts are sold at TJ Maxx.