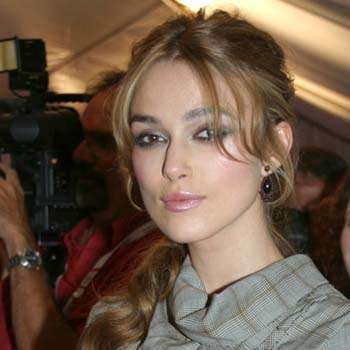 Winslet has won a "substantial donation'' to an eating disorder charity from Grazia magazine over a claim that she visited a diet doctor.
She said: "I am not a hypocrite. I have always been, and shall continue to be, honest when it comes to body/weight issues. I shall continue to hope that women are able to believe in themselves for who they are inside, and not feel under such incredible pressure to be unnaturally thin.'' To this end, she has banned magazines with pictures of skinny stars from her home because of the damaging effect it could have on her six-year-old daughter.

Keira Knightley has launched a libel action over a Daily Mail story she claims suggested she has "dishonestly sought to mislead the public'' about whether she has an eating disorder. Her lawyer said the story, which "made reference to what it perceived to be Ms Knightley's very slim appearance'', was accompanied by a report about the death of a teenage girl who suffered from anorexia. A statement from Knightley's solicitors said she would "challenge the suggestion that she is responsible and to blame for the tragic death of the teenage girl by setting a bad example''.

Kate Hudson won a libel case against The National Enquirer at the High Court in London last year after it suggested the American actor had an eating disorder. She won undisclosed damages after the magazine claimed she had endangered her health by deliberately starving herself. The actor took action against the title after it published a story with the headline "Goldie tells Kate: Eat something! And she listens!'' It claimed that Goldie Hawn confronted her daughter over photographs that showed her looking "painfully thin''. The article was accompanied by a picture of Hudson looking frail and gaunt, taken in mid-August 2005. Her solicitor Simon Smith said the allegations were completely untrue, and embarrassing and offensive to the actress, who was concerned about the impact on her career. Hudson later said: "The allegations I sued over were blatantly false. I felt I had no choice but to set the record straight by challenging them in court.''

Victoria Beckham, who admitted that she suffered from an eating disorder in the early days of the Spice Girls, has reportedly banned skinny models from catwalk shows of her new fashion line to give a "positive image'' to young girls. She has publicly attributed her diminutive stature to "controlled eating'', reportedly saying: "I think there's a big difference between someone having an eating disorder and someone who is controlled about what they eat.''