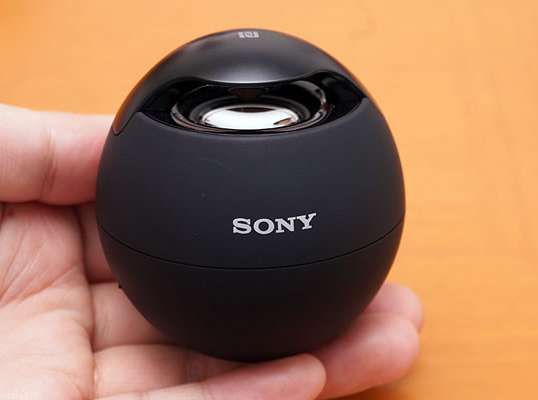 Erin Fox — September 11, 2012 — Tech
References: av.watch.impress.co.jp & newlaunches
Share on Facebook Share on Twitter Share on LinkedIn Share on Pinterest
Sony has released its newest addition to the technological family: the SRS-BTV5 speaker. Much resembling the wonders and aesthetics of the children's toy of the magic 8 ball, it offers portable sound all in the comfort of your palm. What makes the SRS-BTV5 speaker so astonishing is the NFC technology, which allows users to connect seamlessly to their Android phones. The speaker has a tiny microphone and functioning buttons, which allow you to answer phone calls through its wirelessly connected Smart Connect Android application.

With such a sleek style, the SRS-BTV5 speaker unleashes modern flair upon this techie-obsessed culture. This pleasing portable speaker comes in a variety of colors to suit every potential user. Available in black, white, Blue, vivid pink and light pink, it is sure to be on the top list of the fashionably and artistically inclined.
4.3
Score
Popularity
Activity
Freshness
Attend Future Festival