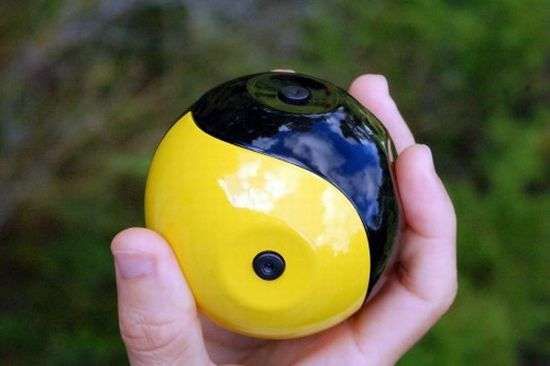 The Squito by Steve Hollinger Takes Both Video and Still Pictures

Meghan Young — September 6, 2012 — Tech
References: slashgear & dvice
Share on Facebook Share on Twitter Share on LinkedIn Share on Pinterest
The Squito by Steve Hollinger, an inventor hailing from Boston, is a camera ball that happens to look like a three dimensional version of the yin and yang symbol. While that ancient Chinese symbol represents natural dualities and complementary forces, this device simply captures images, both still and moving.

Quite similar to the foam-covered Throwable Panoramic Ball Camera that was created last year, the Squito by Steve Hollinger takes video in addition to still pictures. Hollinger was just awarded a patent for his technology, which can also stitch the images together to create a seamless picture no matter how the ball spins thanks to the use of multiple cameras. He is currently working on a functioning prototype to be used for reconnaissance and search and rescue.
2.9
Score
Popularity
Activity
Freshness
Get the 2021 Trend Report FREE