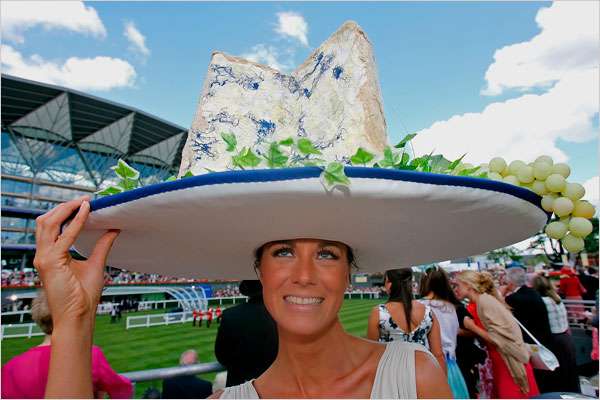 lourdes sanchez bayas — June 25, 2008 — Luxury
References: nytimes
Share on Facebook Share on Twitter Share on LinkedIn Share on Pinterest
The Ascot Racecourse is an English race track, located in the village of Ascot, Berkshire used for thoroughbred horse racing. The Royal Ascot is a prestigious horse race following traditions from its first year in 1711. Globally, the Royal Ascot is known for being the largest of its kind, as well as more being one of the most unique events to observe luxury fashion -- particularly elaborate hats.

The five day event is attended by the British royal family who arrive in Berkshire in an old-fashioned horse-drawn carriage, a fitting entrance for the event.

"The Royal Enclosure has a strict dress codeâ€”male attendees must wear full morning dress including a top hat, whilst ladies must not show bare midriffs or shoulders and must wear hats."

The five day festivities, which are attended by an estimated crowd of 500,000, started on June 17th this year. Ladies Day, which took place on Thursday the 19th, is a very special day when British high society shows up in earnest to see but most important, to be seen. Dressed in designer outfits and donning the traditional spectacular, colorful, over the top hats, the female attendees endure a press coverage that is rabid as it is imperative to report on who wore what on Ladies Day.

And oh yes, the Royal Ascot is about horse racing and the total purse this year was of two million pounds.

Check out the hats! Is that lady on the lead picture wearing a British version of a Mexican sombrero?

Here are some more equestrian hats: