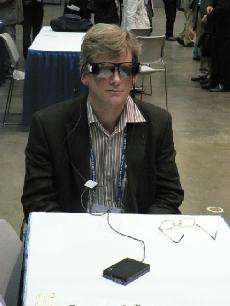 Noora Abu Eitah — May 25, 2008 — Unique
References: techon.nikkeibp.co.jp & gizmodo
Share on Facebook Share on Twitter Share on LinkedIn Share on Pinterest
Sony has revealed its newest video eyeglasses prototype that can show full-color video images. The prototype supports a QVGA resolution, weighs 120g, lenses are 3mm thick , and has a contrast ratio of 50:1. They are hoping to release it in 2010, after they slim it down to 80g.

My question is, how much will it strain our eyes, and what will it cost?

There are other eyeglasses in the market that serve a similar function, which have been featured on Trend Hunter. Here are few of those awesome technologies: