100 Gifts for the New Mom
Next
Set of
Related
Ideas 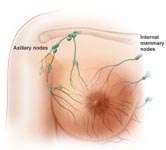 Bianca — October 8, 2007 — Lifestyle
References: topnews.in & news.sawf.org
Share on Facebook Share on Twitter Share on LinkedIn Share on Pinterest
Just in time for Breast Cancer Awareness Month, we get the breaking news that a "smart" bra is under development that will be able to detect breast cancer. The smart bras were designed by scientists at the University of Bolton. In the future, detecting cancer in breasts could be as simple as putting on your underwear in the morning, then plugging in for a quick assessment.

The bra's inventor, Professor Elias Siores, says that the bra will not only be able to detect cancers before tumors develop, but that the undergarments will also be able to assess the effectiveness of women already undergoing cancer treatment.

"It could emit two warnings, audible or visual or both. If the warning persists, you would see a specialist," he was quoted by Discovery News.

100 Breast Cancer Fundraisers
From Cosmetic Transformations to Self Diagnosing Stickers