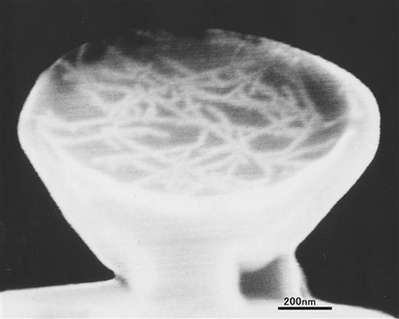 Ayman — June 2, 2008 — Unique
References: news.yahoo
Share on Facebook Share on Twitter Share on LinkedIn Share on Pinterest
A team of Japanese scientists have created the world's smallest noodle bowl with a diameter of 1/25,000 of an inch under a project aimed at developing nanotube-processing technology. In fact, the bowl is so small that you have to use a microscope to see it.

Mechanical engineering professor Masayuki Nakao claims, â€œWe believe it's the world's smallest ramen bowl, with the smallest portion of noodles inside, though they are not edible.â€

The Japanese-style ramen bowl was carved out of microscopic nanotubes (tube-shaped pieces of carbon). They created a "string of 'noodles' that measured one-12,500th of an inch in length, with a thickness of one-1.25 millionth of an inch."

The microscopic bowl which was first created in December 2006 was only revealed this last week after it was entered for a microphotography competition.
2.4
Score
Popularity
Activity
Freshness
Get Trend Hunter Dashboard