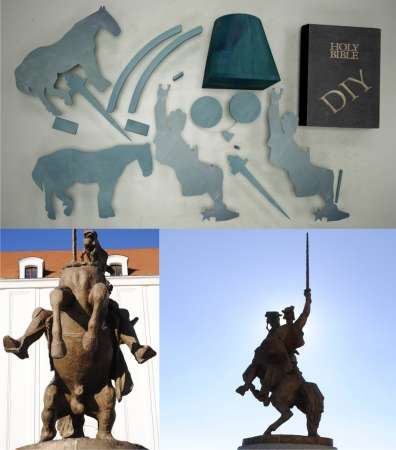 The D.I.Y Collection by Marussiac Sends a Political Message

tomas marussiac — October 16, 2011 — Art & Design
References: marussiac.cultcode
The D.I.Y. Collection by Marussiac aims to make fun of the original statue of the Duke Slavonic-Savatopluk in Bratislava.

The unveiling of the statue caused great debate, and has since become a major tourist attraction. Tomas Marussiac studied in Bratislava where the statue was built and placed, and in December of 2010, he decided to make an art protest. The main idea behind the D.I.Y. Collection by Marussiac is to show how a bad monument is created. Marussiac ignores the principles of sculpture, and instead creates his own version of the statue that appears to be toppling off the base onto the ground.

Marussiac stylized the statue as a rocking horse, and aims to mock the post-communist era of art in his country.
5.6
Score
Popularity
Activity
Freshness