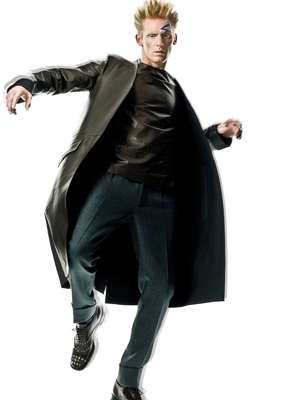 Brian G Randles — October 1, 2009 — Fashion
References: sharonmoryosef & thefashionisto
Jordistyle by Sharon Mor Yosef actually has nothing to do with Harry Potter; however, due to the placement of the blue scar on the model’s head in the photos, I cannot help but make the Hogwarts connection.

Styled by Pedro Dias and photographed by Sharon Mor Yosef, the collection brings a futuristic look to men’s fashion, and provides some possible wardrobe options for the most famous student at Hogwarts.

Implications - In a contemporary consumer culture dominated by blockbuster Hollywood movies and products co-branded with celebrities, one of the most effective ways a company can create a lasting impression on the minds of consumers is by investing in partnerships with major film franchises. By attaching the company name to a major film series, the company establishes itself as one on the forefront of contemporary pop culture.
2.6
Score
Popularity
Activity
Freshness