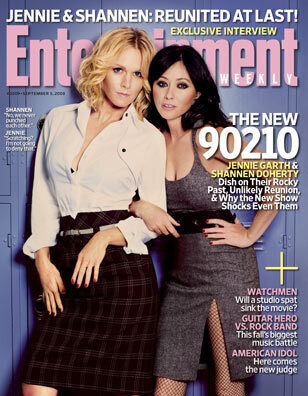 Ayman — August 29, 2008 — Pop Culture
References: ew
Share on Facebook Share on Twitter Share on LinkedIn Share on Pinterest
Shannen Doherty and Jennie Garth are featured in an awkward “we are friends, y’all” shot on the new cover of Entertainment Weekly. The reason? They have to play nice to promote the new spin-off of cult favorite, Beverly Hills 90210, on The CW on September 2.

This goes to prove that Shannen Doherty and Jennie Garth are pretty good actresses, because the inside feature tells another story of their friendship background.

When asked by EW about the famous fistfight, Doherty was fast to deny, “No, we never punched each other.” But Jennie Garth admitted that there was some truth to the rumor, “Scratching? I’m not going to deny that.” She continues, “I just remember being outside and the boys having to try to settle us down.”

However, both women declare truce and, to the disappointment of many fans, their characters Brenda Walsh and Kelly Taylor will not be fighting over a guy in a love-triangle. Actually, they are reportedly pretty friendly in the new script. Only in Hollywood…
6.1
Score
Popularity
Activity
Freshness
Get the 2021 Trend Report FREE