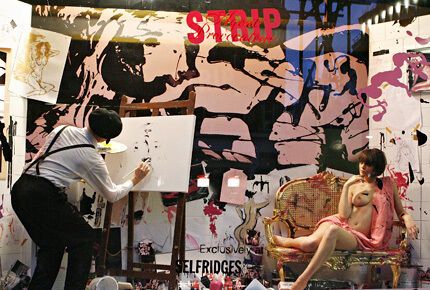 Selfridges Gets Naughty To Promote Stripped

Bianca — February 23, 2008 — Naughty
References: dailymail
Share on Facebook Share on Twitter Share on LinkedIn Share on Pinterest
Naughty marketing is one of the most tried and true ways of getting attention, but it's still rare to see full on nudity in a public place. Selfridges in London had a model pose nude in their window during rush hour, wearing nothing but a shawl as she posed for a painting by Jacques le Trompet,.

Her breasts were exposed out as she sat for the portrait, not distracted at all by the people gathering to take a peak.

Surely a lot of jaws dropped as shoppers strolling Oxford Street caught a glimpse of the nude scene. It's all part of a viral campaign to promote awareness for the launch of Stripped, the new perfume from Agent Provocateur.

After the painting was completed, the curtains were drawn and the live model replaced by a mannequin.

In my opinion, it's very tasteful, but then again, my European upbringing taught me there is no shame in nudity.
5.5
Score
Popularity
Activity
Freshness
Get Trend Hunter Dashboard