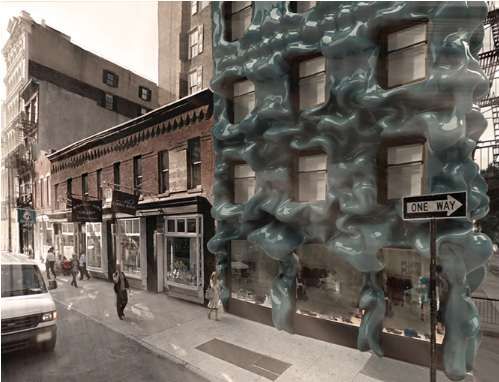 Sartorial Tectonics Aims to Engage Passers-by with an Engrossing Facade

Amelia Roblin — January 10, 2013 — Art & Design
References: davidescialo & suckerpunchdaily
Share on Facebook Share on Twitter Share on LinkedIn Share on Pinterest
It is in projects like Sartorial Tectonics that the everyday observer can begin to see the relationship between fashion design and architecture. Such is a theory that can be considered with respect to all buildings, but particularly with this one on Wooster Street in Soho, New York.

Through his participation at Andrew Saunder's seminar at the Rensselaer Polytechnic Institute, Davide Scialo was inspired to contemplate the act of simply "dressing" a structure versus "dressing it up." Instead of installing conventional cladding to the exterior of the five-story brick edifice, the designer applied gelatinous-looking panels to create a gooey undulating texture.

It seems as though the facade of the Issey Miyake Pleats Please store has turned to liquid, forming wobbly and weighty clumps as it approaches street level. But no matter how you interpret Sartorial Tectonics, Scialo certainly succeeded to produce a remarkably engaging project.
3.2
Score
Popularity
Activity
Freshness
View Innovation Webinars