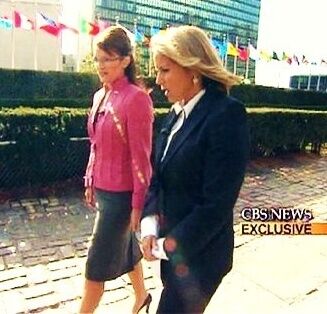 Ayman — September 27, 2008 — Social Good
References: afp.google
Share on Facebook Share on Twitter Share on LinkedIn Share on Pinterest
Regardless of the results of the 2008 Presidential debates, the republican party has lots to worry about as their golden ticket, Sarah Palin, is getting slaughtered by the media after her disastrous interview with Katie Couric (featured earlier on Trend Hunter HERE).

Even Pro-Republicans can’t deny that the interview with Katie Couric proves Sarah Palin is an embarrassment to the republican party. Kathleen Parker who writes in the National Review goes as far as suggesting Sarah Palin should step down as John McCain’s running mate.

“Palin’s recent interviews with Charles Gibson (ABC News), Sean Hannity (Fox News) and now Katie Couric have all revealed an attractive, earnest, confident candidate. Who Is Clearly Out Of Her League,” Parker said.

In the interview, Sarah Palin struggled to provide examples of legislative action taken by McCain that could have avoided the credit crisis, “I’ll try to find you some and I’ll bring them to you,” Palin said to interviewer Katie Couric.

Sarah Palin again emphasized that Alaska’s geographic location is proof of her world knowledge, “Well, it certainly does, because our, our next-door neighbors are foreign countries, there in the state that I am the executive of.”

“It is from Alaska that we send those out to make sure that an eye is being kept on this very powerful nation, Russia, because they are right next to, they are right next to our state,” Sarah Palin explained, adding that when Russian Prime Minister Vladimir Putin “rears his head and comes into the airspace of the United States of America, where do they go? It’s Alaska.”

34 Feverish Finds
From World Cup Fever to Palin Fever, Innovations to Put You in Hysterics