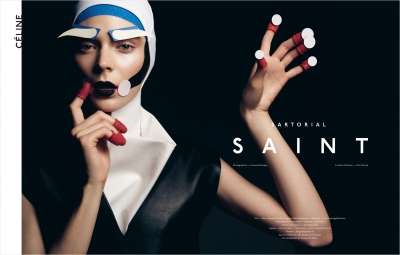 Saint for Dansk Magazine is an Original Series with Kinga Rajza

The model has been photographed in designer garments from Dior, Prada and more. The makeup designer has kept the model fresh-faced except for her lips, which have been painted black.

Kinga Rajzak is covered in bizarre white, black, red and green paper accessories, which are placed on top of her facial features. These enlarged paper accessories cover eyebrows, finger tips, eyelashes and colored circles have even been placed on her cheeks. This interesting editorial stands out, and is set to be published during Copenhagen Fashion Week.