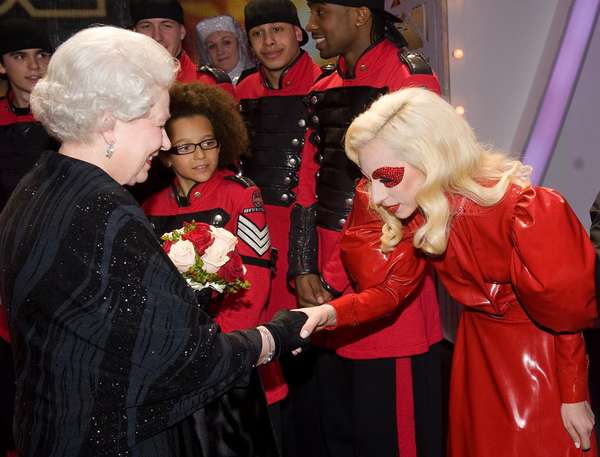 Cara Czech — December 9, 2009 — Pop Culture
References: ehow & dailymail
Share on Facebook Share on Twitter Share on LinkedIn Share on Pinterest
Call it a photo op, a tradition, or an honor. Whatever you call it, everyone from Barrack Obama to Bette Midler wants to hang with Her Majesty, the Queen of England. The UK’s annual Royal Variety Performance was the perfect opportunity for just that.

The Royal Variety Performance is an event sponsored and attended by the British Royal Family. This year, the Queen and Prince Charles attended the event and watched performances from recent chart-toppers such as Lady Gaga and Miley Cyrus.

Lady Gaga gave homage to the Royal Family by appearing on stage for the Royal Variety Performance in a red latex outfit meant to be a futuristic take on the clothes of Victorian Queen Elizabeth I. The queen of avant-garde pop met with the Queen of the British Empire after the show and professed her admiration for the monarch. She said, "I was so excited and have even been practicing my curtsy."

Nothing says ‘hot right now’ like a press shot with the Queen of England. Not only is she beloved by the British people, she represents a link between tradition and modernity—a living representation of a past age who can still pose for pictures with pop sensations.
3.9
Score
Popularity
Activity
Freshness
Access Advisory Services