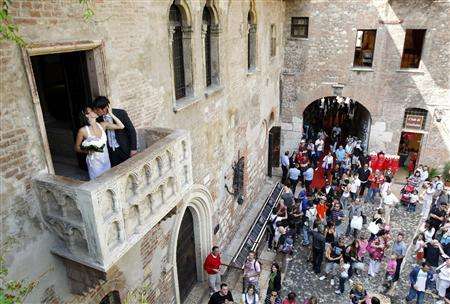 Get Married on the Real Romeo & Juliet Balcony in Verona

Bianca — June 8, 2009 — Lifestyle
References: reuters
Luca Ceccarelli was the first lucky modern Romeo to wed his Juliet on the same Verona balcony said to have been the architectural muse of William Shakespeare -- but he won't be last.

After the soccer star wed Irene Lamforti this week, the infamous balcony has been made available as a 900 euro wedding locale.

"The 13th century mansion of the Cappello family -- believed to be the Capulets of William Shakespeare's tragic play Romeo and Juliet' -- has for years been a place of pilgrimage for lovers worldwide, who have scrawled love messages on its walls," Reuters explains.

So, if you really want to feel like star-crossed lovers, I can think of no more romantic place to say your vows; it's as romantic then as it is now.
3.8
Score
Popularity
Activity
Freshness