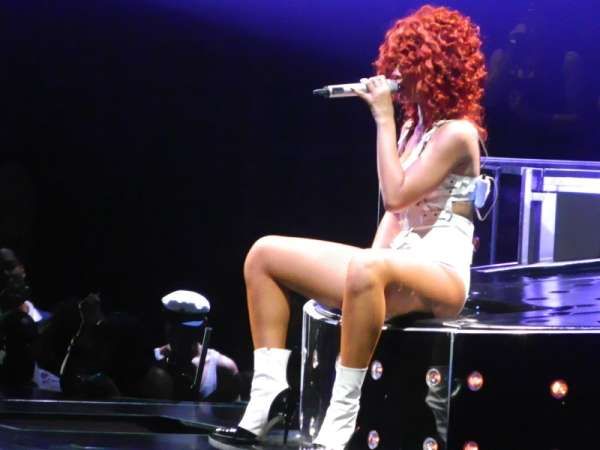 Marissa Brassfield — June 5, 2011 — Naughty
References: rihannanow & theybf
Share on Facebook Share on Twitter Share on LinkedIn Share on Pinterest
Rihanna kicked off her Loud tour with a bang yesterday, giving a female fan a lap dance while she performed "Skin." In the video above, Rihanna's dancers pull a female fan onto a round rotating platform, where Rihanna gyrates atop the fan before the platform descended out of view.

Cee-Lo Green and J. Cole were also on hand at the Rihanna concert. The performer sang all of her major hits, from "Shut Up and Drive" to "Man Down." During one set, she even played the drums.

It's Rihanna's lap dance, however, that's making waves today. Female performers are continually looking to push boundaries when it comes to expressing their sexuality. Sapphic acts have become a major aspect of these stunts in recent years; the three-way kiss between Madonna, Britney Spears and Christina Aguilera at the 2003 MTV Video Music Awards is just one forever-remembered example.
5.3
Score
Popularity
Activity
Freshness
Attend Future Festival