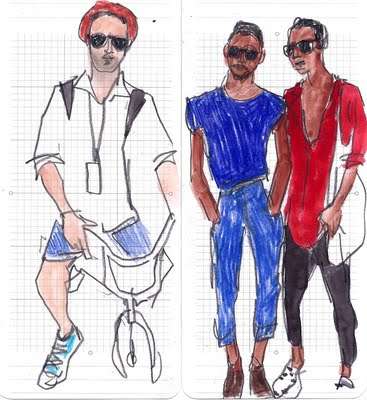 Katherine Vong — September 3, 2009 — Fashion
References: designerman-whatisawtoday.blogspot & nymag
For those of you not aware of who Richard Haines is, he’s the guy sketching you from across the street. People-watching is apparently out. Sketched illustrations of cool things and stylish people is the more gratifying activity to do when you’re alone and bored. Menswear designer Richard Haines gives us a prime example with his blog “What I Saw Today.”

Having worked at some of the best menswear fashion houses, Richard Haines has acquired both a design eye and a knack for realistic illustration. This is apparent in his sketches of New York street style, which showcases everything from men on mopeds--wearing fashionably ripped denim cut-offs, of course--to people doing handstands in Central Park.

If this is something you’re gearing to do (and I’m assuming you’re not Richard Haines), it’s probably a good idea to tell the people you’re about to sketch what it is you’re doing.
2.4
Score
Popularity
Activity
Freshness