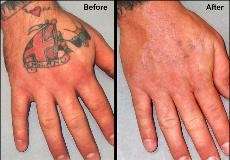 Rhonda Knott — August 31, 2006 — Lifestyle
References: usforacle & manchestereveningnews
Share on Facebook Share on Twitter Share on LinkedIn Share on Pinterest
It's all in the Ink! Making the choice to mark your skin permanently is a huge decision and lets face it a lot of people , 50 percent in fact(according to quoted current stats) who have taken the step are now regretting the decision. It doesnt look so hot on a granny and mabye the ex girlfriends' name on your arm is beginning to wear thin on your current love interest.

A company called Freedom-2 LLC have invented a tattoo ink that can be easily removed after one lazer treatment instead of the 10 initial treatments that would normally be required.

Current removal methods can cause infection and scarring and in many cases does not quite remove the tatoo altogether. Traditional inks are made of substances used in car paints and printing, they are toxic and can seep into the lymph system as well as being difficult to remove.

The new ink due to be released next year is gentle on the body and the compounds in the dye have already been approved by the US Food and Drug Administration Board for use in cosmetics, food, drugs and medical devices. The dyes are encapsulated in tiny polymer beads that are then injected into the skin to form a tattoo. On removal by a laser the beads split open spilling the contents which are absorbed and the tattoo quickly fades away.

Following close on the heals of the first ink discovery is the introduction in the year 2008 of another breakthrough ink technology for Temporary Tattoo's. Once the "tattoo" is applied it begins to dissolve in the skin and within six to 24 months, will disappear entirely.

Now there can be one less regret to live with!
6.2
Score
Popularity
Activity
Freshness
Attend Future Festival Virtual