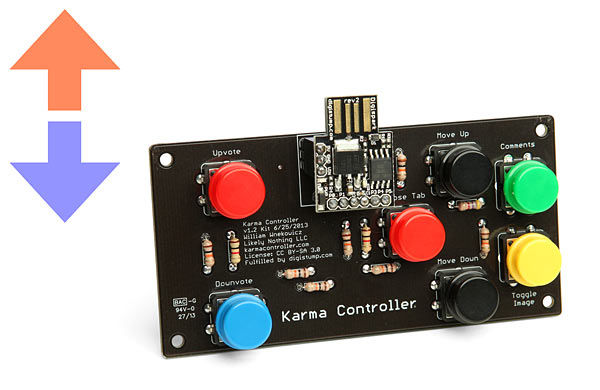 Anne Booth — September 29, 2013 — Art & Design
References: gizmodo & thinkgeek
The 'Reddit Karma Controller' is for those ultimate reddit fans who just can't seem to get enough. Reddit is one of those sites that you never want to leave, but instead of using a boring mouse in order to like posts, try this amazing gaming controller.

The controller has different colored buttons on it that allow you to "upvote" and "downvote" posts by clicking the buttons. This makes fast and easy clicking possible, making reddit that much more addictive. The device also allows you to build it yourself so that you can feel proud after making your computer controller.

There are seven buttons in total on the controller. As well as liking and disliking posts, you can also "toggle" images and open and close comment tabs. Turn reddit into a video game with the 'Karma Controller DIY Reddit Interface Device' -- just be prepared to never leave the site after you make it more addicting than it already is.
5.9
Score
Popularity
Activity
Freshness