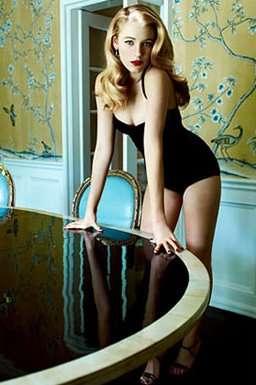 lourdes sanchez bayas — January 14, 2009 — Celebs
References: style
Share on Facebook Share on Twitter Share on LinkedIn Share on Pinterest
The sultry Blake Lively, who graces the cover of the February 2009 issue of Vogue Magazine, has had a meteoric rise to fame. After starring in movies, she made it big with her role as Serena van der Woodsen in the hit TV show “Gossip Girl,” which is set on the opulent and exclusive Upper West Side of Manhattan.

Photographed by the great Mario Testino, Lively, who is dressed in black for the cover as well as the spread, is captured in various settings wearing the fantastic and ultra chic creations of haute couture designers such as Oscar de la Renta, Michael Kors and Jimmy Choo.

The story was penned by Alessandra Stanley who notes that, “Manhattan is weathering stormy economic times. Yet on Gossip Girl, the pretty young things are partying like it’s...well, not 2009."

So, financial crisis and credit meltdowns be damned! Those 'little' real life minutia do not belong in the fantasy world of Gossip Girls.