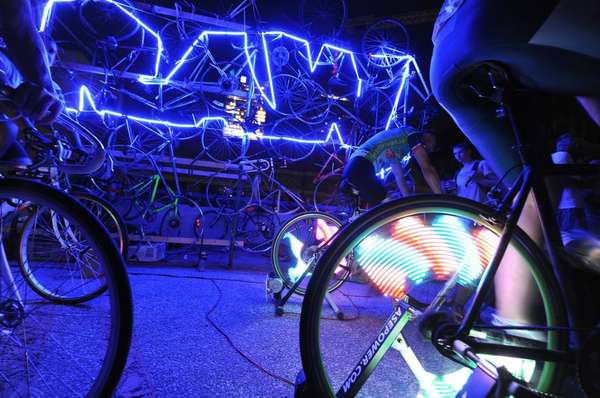 The RAW ENERGY Event was Fueled by Humans and Eco-technology

Jen Chae — July 4, 2013 — Eco
References: rawdesign & urbantoronto
Setting up an outdoor party often requires the use of electrical outlets, but the RAW ENERGY event hosted by Toronto-based RAW design studio did not. This environmentally conscious event was completely fueled by humans; its lights, music and lively atmosphere were powered by eco-technology that used physical motion as its energy source.

Before entering the rooftop venue, guests were offered rickshaw rides as substitutes to elevators. A station of a dozen wired bicycles lit up strings of LED lights, while a life-sized hamster wheel and two bicycles on each side of the DJ booth generated the energy for live music. Even the smaller details were eco-friendly, like the catering's completely wood-made cutlery.

This was all very fitting with the event's theme of celebrating human-powered technology; it was evident that humans were indeed the ones fueling the development of the city.
5.1
Score
Popularity
Activity
Freshness