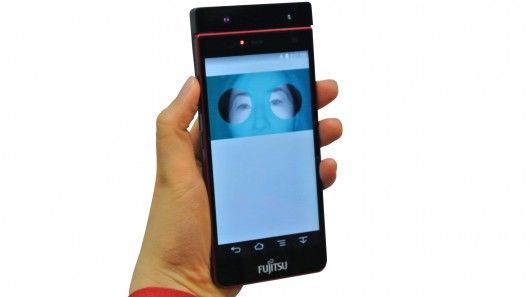 Meghan Young — March 10, 2015 — Tech
References: fujitsu & gizmag
Share on Facebook Share on Twitter Share on LinkedIn Share on Pinterest
Fujitsu has created a prototype smartphone that moves beyond the fingerprint and voiceprint recognition for added security. Instead, it relies on a simple blink, which nevertheless grants as much safety as it does convenience to the owner. Unveiled at the Mobile World Congress, the prototype smartphone relies on the complex pattern of the iris as an effective form of biometric authentication.

Gizmag reveals that "because the composition of the iris changes very little after someone is older than two-years of age, it is largely unaffected by the passage of time, providing much greater long-term security than a password." Thus, the Fujitsu prototype smartphone ensures a system that doesn't require much work once implemented. It works through a bespoke, high-output infrared LED illumination and a customized infrared camera.
2.2
Score
Popularity
Activity
Freshness
View Innovation Webinars