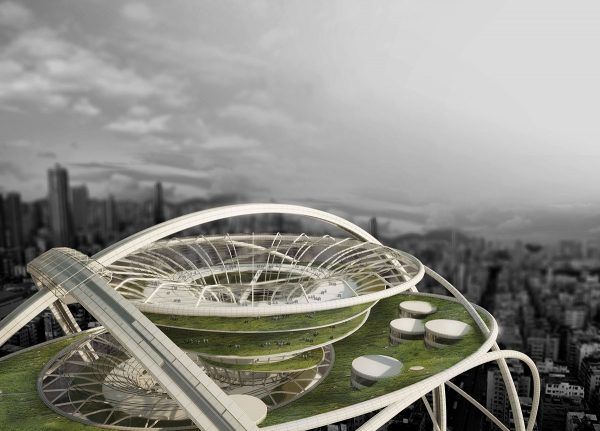 Joey Haar — July 10, 2016 — Eco
References: evolo.us
Share on Facebook Share on Twitter Share on LinkedIn Share on Pinterest
Skyscrapers solve the problem of limited surface area in metropolises, yet they often result in cramped living quarters for their inhabitants; Project ZERO addresses this issue by not only building upwards, but outwards too. The concept, designed for Hong Kong, is roughly spherical in shape, such that only a small portion makes contact with the city yet a massive bubble rises into the sky.

Project ZERO is ambitious: it measures in at 700 meters tall and 700 meters wide. To put that size into perspective, it would be the equivalent of slightly more than two Eiffel Towers stacked vertically and two more stacked horizontally.

The concept will not be entirely covered by material. Instead, two "skeletons" carry the majority of the vertical and horizontal loads. Since Project ZERO presents so much more living space than standard skyscrapers, it will also include a massive "sky garden" towards the top of the sphere.
5.8
Score
Popularity
Activity
Freshness
Get Trend Hunter Dashboard