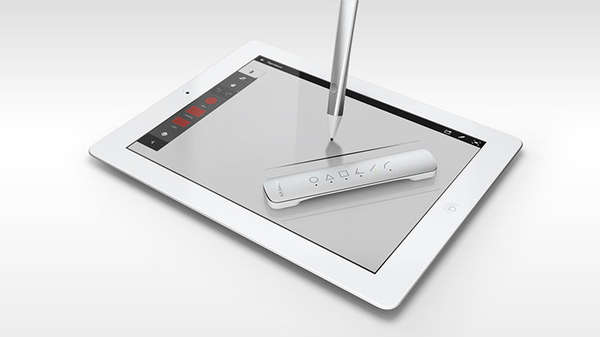 Meghan Young — May 9, 2013 — Tech
References: ammunitiongroup & fastcodesign
Adobe might have broken many hearts when announcing the end of Creative Suite, but it is at least trying to help dull the pain with a more positive announcement in the form of Project Mighty. It is a cloud-connected aluminum pen that not only replaces the finger on tablets, it is able to versatilely and simultaneously move between different devices. Soon it will be able to go between digital and non-digital devices.

Created by Ammunition and engineered by Mindtribe, Project Mighty is accompanied by a short ruler cleverly dubbed Napoleon. Ammunition Founder Robert Brunner also reveals, "One of the goals of this was just to make a beautiful, sweet object.[...] We took the triangular shape--this classic shape that’s easier to grip--and twisted it. So the point at which your fingers hold it, the pen is at its best."
2.9
Score
Popularity
Activity
Freshness

Dual-Function Phone Stands
The Stilt by Quirky Serves as a Prop for Your Cell, as Well as a Stylus