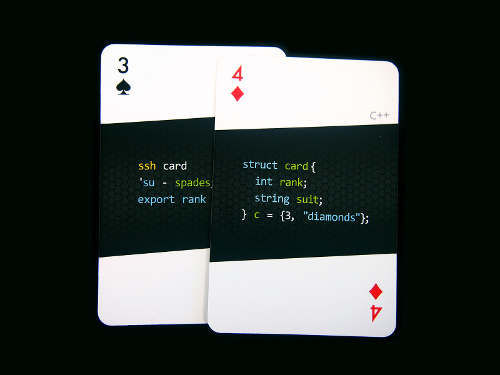 Lacey-Jane Walsh — December 8, 2013 — Art & Design
References: varianto25 & theskunkpot
This deck of cards features multiple programming languages, making it the perfect stocking stuffer for IT geeks this holiday season. The name of this clever card deck is ‘Code:Deck’ which seems fitting. Each card features an excerpt describing the card’s rank, but each excerpt is done in a different programming language to keep things interesting.

People who love playing cards will enjoy this modern deck design (even if they’re not programmers). There are so many different card games to play, from poker to euchre, so giving someone a deck of cards is essentially like handing them an endless supply of games. This particular deck is great because it also introduces players to various different programming languages, which is pretty interesting stuff.