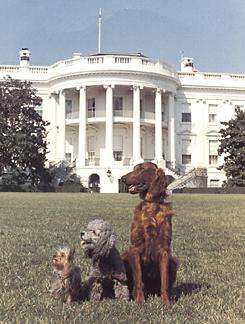 I totally love the concept of a puppy for the White House, I just had to do some research on past presidential pets.

This trend comes from a totally random and equally brilliant Presidential Pet Museum which was "founded in 1999 as a repository and means of preserving information, artifacts, and items related to the Presidential Pets."

It is so bad, it is brilliant, and it gets better as the museum is now open to the public with over 500 items of interest displayed for lovers of pets, presidents and pet trivia. Personally I think the older pictures of the pets totally rock!

There are also really random and fairly freaky plush examples of presidential pets, all wearing the Stars and Stripes, of course. Miss Beazley makes me a laugh; the toy has same dazed expression you can imagine any pet of George Bush’s might have!

Here are some of the most recent White House fur babies seen on the site.

George Bush created a veritable petting zoo over time with Miss Beazley and Barney, two Scottish Terriers, another dog called Spot, and a cat named India. She was a present from Mrs. Bush.

Bill Clinton had the infamous Socks the Cat who hated the other pet Buddy, a chocolate Labrador Retriever.

Ronald Regan had Lucky, a Bouvier des Flandres. Not so lucky as she grew too big and was replaced by Rex, a King Charles Cavalier Spaniel.

29 Sensational Socks
From Stiletto Socks to Socks for Flip Flops