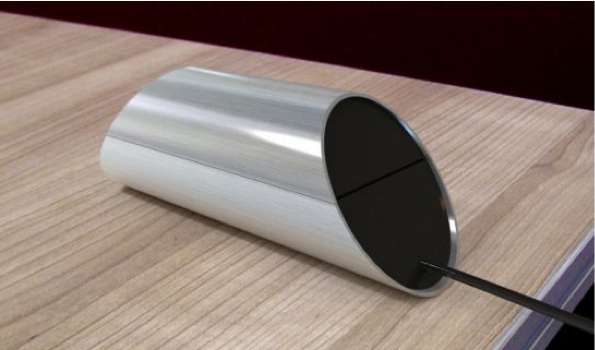 The Pophone Concept Brings Bulky Buzzers Back into Style

Amelia Roblin — August 29, 2011 — Art & Design
References: gasparventura & designbuzz
Share on Facebook Share on Twitter Share on LinkedIn Share on Pinterest
It's a common habit to place the handset of a cordless phone somewhere other than its charging station after use, but the Pophone concept kindly asks you not to. It's not just for the convenience of locating it later or the need to keep it juiced up, but the two halves of this gadget simply don't look complete when separated.

Gaspar Ventura's unique design becomes an elegant cylindrical device when both parts are placed together. A curved brushed aluminum veneer surrounds the set which protects the black plastic within, concealing the dialpad and the LED screen. While one might call the Pophone concept streamlined, it is anything but small and sleek. There's a great benefit to being able to handle such an appliance, and its scale celebrates its graceful form.
1
Score
Popularity
Activity
Freshness
View Innovation Webinars
play_circle_filled