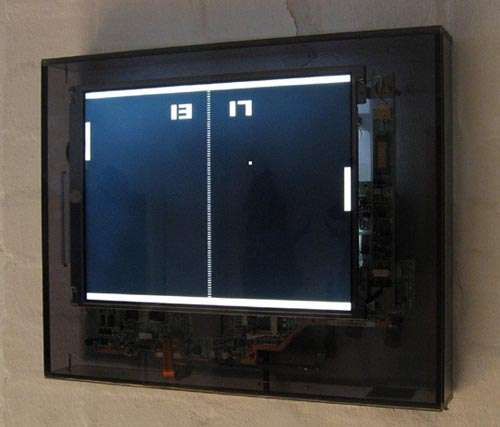 Jeremy Gutsche — January 20, 2006 — Tech
References: burovormkrijgers.nl & gizmodo
Share on Facebook Share on Twitter Share on LinkedIn Share on Pinterest
Instead of staring at a boring, regular wall clock, you could be watching an epic (although fictional) battle of pong being played out on your wall. That's right, the legendary game that started it all, Pong, has now been made into a functional time piece that screams, "I'm not a nerd." Wait, that's not true.

Implications - Classic video games that were once deemed strictly nerdy are taking on a new twist by becoming chic home decor accessories. This trend reflects how what is typically considered "nerdy" is being remixed and valued on its known its cleverness and surprisingly, its good taste. Other industries can take traditionally "nerdy" stereotypes and put a modern spin on it, making it cool.
3.6
Score
Popularity
Activity
Freshness
View Innovation Webinars

22 Innovations in Pong
From Glove Paddles to Boozetastic Trick Shots